Internationalization (often shortened to i18n) allows your app to run in multiple languages. For example, the user could choose to work in English, French, German, Spanish or Italian. Any number of languages can be used.

This information should be saved in a file called de.json, saved in a folder named i18n in your project folder. The two letter code 'de' is the international standard code for the language.

Add 'i18n' to the extraFiles property in Project Properties, so the files get deployed with your project.

To enable i18n in your project, select i18n in the Libraries panel: 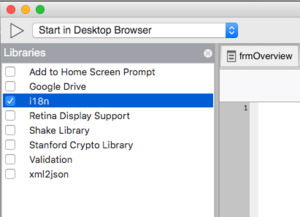 Common and Bootstrap 4 controls already have i18n enabled - nothing further needs to be done.

Assignments to controls at runtime need to call the i18n function as follows:

It's safe to do this with any string: if there is no entry in the translation table, the value is unchanged.

The content of Containers will be translated if they are simple text.

If the content has HTML, you will have to supply the translation string add a data-i18n attribute, as follows:

If a control has child controls, do not put anything in the textContent property. If you need to have text in a parent control, add a child (like a Label) with the text.

DataTables has its own translation table. Set the language when you initialize the table:

You will also need to set the value of myApp.constants.LANGUAGE in your app's initialization:

DataTables has the language tables for most common languages here: https://datatables.net/plug-ins/i18n/

Some jqWidgets controls support i18n. To enable it, add this line when you create the control:

A couple of extra files need to be included. Add these lines to extraheaders in Project Properties (fix path as needed):

When your app starts for the first time, the default language is used. If the language is changed, the setting is remembered next time the app is started.

Here's how to change the language:

Buttons: Icons and Badges are not supported when i18n is used. Only Buttons with an icon (and no text) will work.

Tooltips and Popovers: Values must be set at runtime.

Format of the xx.json files

The formatting rules for JSON are not the same as for JavaScript. A couple of things which often cause problems are

using single quotes instead of double quotes terminating the last definition with a comma. Unfortunately, if there is a problem with the JSON format, the conversion fails silently, so you have no idea what happened (or didn't happen).

You can check JSON using a site like https://jsonlint.com/.

To use i18n in an app compiled using VoltBuilder, the i18n translation files have to be declared in your contentSecurityPolicy.

Make sure this appears in your connect-src clause:

If you're running on iOS, you also need to include these lines in your config.xml: