Bootstrap describes itself as "the most popular HTML, CSS, and JS framework for developing responsive, mobile first projects on the web.'

It is a free and open-source front-end library for creating websites and web applications. It contains HTML- and CSS-based design templates for typography, forms, buttons, navigation and other interface components, as well as optional JavaScript extensions. It aims to ease the development of dynamic websites and web applications. Originally developed at Twitter as an internal tool, it was released as an open source project in August, 2011. Bootstrap is the second most-starred project on GitHub, with over 95 thousand stars and more than 40 thousand forks.

The main Bootstrap site is http://getbootstrap.com/.

No installation is required. AppStudio installs everything needed, both for development and at deploy time.

One of Bootstraps most powerful and useful features is its use of grids to organize responsive content. This is covered in Bootstrap Grids.

Grids allow you to organize your controls into responsive blocks to handle different screen sizes. For example, an iPad might display data in two side by side blocks, where an iPhone would put the blocks one over the other.

Most controls support Badges, which are a label with some additional information. Here is a Button with a Badge:

Values of Badges can be set at design time or runtime:

To delete a badge, set its value to an empty string:

Many controls support icons. Here is a button with an icon:

The icons come from the Font Awesome library, which at last count has over 634 icons in it. The size of the icon is determined by the font size of the control it is in.

To use an icon, put its name in to the icon property without the fa prefex. So, for fa-camera-retro, put just camera-retro.

To set an icon at runtime, set the complete icon class:

You can modify the appearance of your icon by adding additional parameters. For example, to make a spinning bed, add fa-spin as follows:

Here are some of the modifiers:

The children do not have to be Bootstrap controls. Here is a Thumbnail control, with a Label added as a child:

Most Bootstrap controls allow Popovers and Tooltips. They are specified at Design Time.

Bootstrap comes with 17 themes built into AppStudio. There is one theme per app: all controls use that theme. The BootstrapTheme is set in Project Properties.

If you change the theme of a project, the change will go into effect in the Design Screen next time it is reloaded.

Many controls have an Appearance property. This sets the color of the control to one of a set of predefined colors, based on the urgency of the control. Appearances include default, primary, success, info, warning, danger and link. 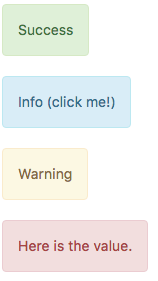 Each Bootstrap control has a collapse function. This toggles the control between visible and invisible. The position of other controls is automatically adjusted.